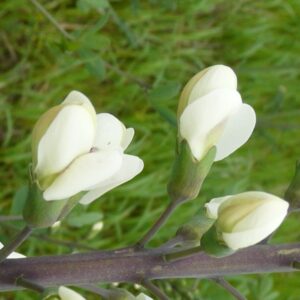 SCIENTIFIC NAME:  Baptisia leucantha – The scientific name is now Baptisia alba. This plant may have been used as a poor substitute for indigo dye as the origin for baptisia.  The Greek word baptizein means “to dye.”

FLOWER:  White pea like flowers clustered on an erect stem.

SPECIAL FEATURES:  White wild indigo bears its white clusters of flowers on a stalk.  These stalks may rise above the other prairie grasses.  The leaves are velvetly trifoliate (having three parts).  Leaves and pea-like pods turn black with the first frosts and make an interesting subject for dried arrangements.  This plant is of special value to native bees and attracts butterflies.

SUGGESTED CARE:  Water carefully during the first season after planting, but be sure there is good drainage.  After it is established it should not be disturbed because of the deep taproot.  It seems to be tolerant of hot, humid summers, poor soil and drought.