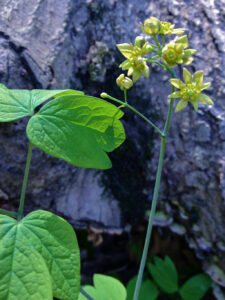 COMMON NAME: Blue cohosh, Papoose-root
SCIENTIFIC NAME: Caulophyllum thalictroides – The Greek word caulos means stem
and phyllon means leaf. The stem seems to be the stalk for the large compound leaf.
Thalictroides means that it resembles the genus thalictrum (meadow-rue).
FLOWER: Inconspicuous brownish-green to yellowish-green flower about ½ inch in
diameter. Each flower has 6 pointed sepals.
BLOOMING PERIOD: Late April to mid-May
SIZE: 1 to 3 feet tall
BEHAVIOR: This is a many-stemmed perennial with thick and creeping rootstock.
Propagate by seed or divide the rootstock in autumn.
SITE REQUIREMENTS: Does best in shady woodland areas with humus-rich slightly
acidic soil. It should consistently moist soil that does not dry out. Blue cohosh is
frequently found on slopes.
NATURAL RANGE: Eastern Canada to Manitoba, south to Tennessee, Georgia,
Alabama and west to Missouri. It is found throughout Wisconsin. This species also
occurs in eastern Asia.
SPECIAL FEATURES: Blue cohosh is not valued for its flowers, but for the compound
leaves that are blue-green. The flower stalks mature to erect clusters of blue fruitlike seeds that resemble very small grapes. These fruits are poisonous.
SUGGESTED CARE: Easy to grow, requiring minimum care. Cover in winter with
oak or other deciduous leaves and do not try to uncover the plants in the spring.
COMPANION PLANTS: Plant blue cohosh under maple and basswood trees along
with maidenhair fern, wild leek, Jack-in-the-pulpit, spring beauty, toothwort,
bloodroot and other woodland spring flowers.
SPECIAL NOTE: While the seed berries are poisonous, the roots have been used in
homeopathic medicines, especially as an aid to giving birth