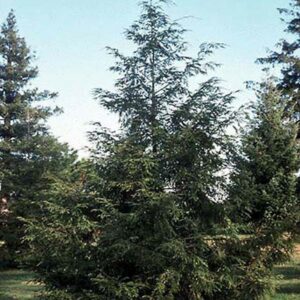 SCIENTIFIC NAME:  Tsuga canadensis.  The word tsuga from the Japanese word for hemlock.  The name hemlock is derived from the perceived similarity in the smell of the crushed foliage to that of the unrelated plant “poison hemlock.”  Eastern hemlock is not poisonous.

BEHAVIOR:  Hemlock trees form a pyramidal shape with feathery branches.  The evergreen short needles are flat, dark green and silvery on the underside.

NATURAL RANGE:  Nova Scotia to Manitoba, Maryland to Minnesota and south in the mountains to Georgia and Alabama.  It is found on rocky ridges and moist mountain slopes

SPECIAL FEATURES:  These are graceful shade trees.  Pioneers used the bark as a source of tannin for preparing leather and made brooms from the branches.  There are abundant small cones about ½ to ¾ inches long that hang from the branches.

SUGGESTED CARE:  The soil needs to have good drainage and be slightly acidic.  Strong, drying winds will kill the branches.